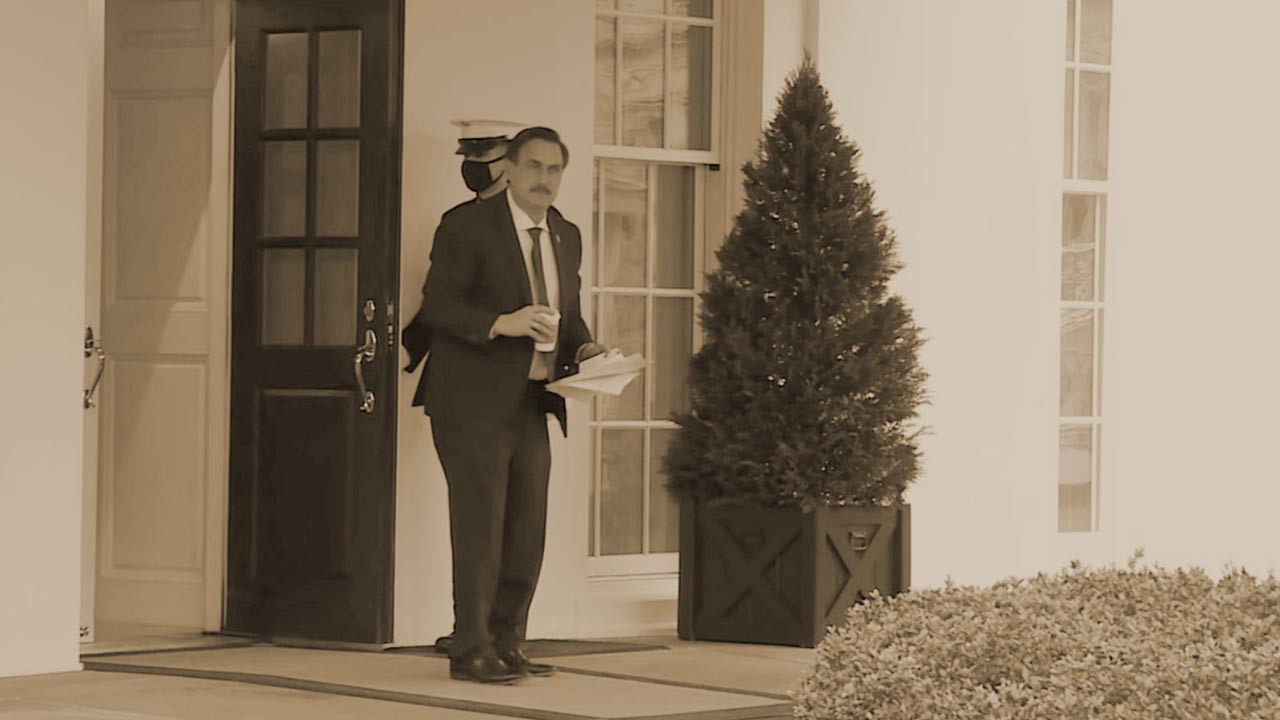 With a massing military security presence in Washington, D.C.,  for next week’s Presidential Inauguration of Joe Biden, the White House press pool broke out in frenzied hysteria regarding Mike Lindell’s visit to the West Wing Friday afternoon.  Keep reading.

This may be the most bizarre news story yet of 2021

As reported by several White House pool members, this is what unfolded today. White House reporters stated Trump was completely away from the Oval Office all day today, until 3pm — as Marine guards were missing from West Wing until 2:45pm. At or around 3pm Washington Post Photographer, Jabin Botsford, photographed My Pillow CEO, Mike Lindell, entering the Oval Office with uncovered notes and a cup of coffee in hand.

Mike Lindell has developed a close relationship with Donald Trump over the years and is known to be a strong supporter of the Trump Presidency. He has visited the White House on multiple occasions.

While Mike Lindell was entering and leaving the White House, WashPo’s photographer took several photos. One photograph revealed a partially exposed typed-out note in Lindell’s hand. Although taken from quite a distance, the photograph is very detailed; so detailed, words and partial phrases on the paper are legible when zoomed in.

Here are the photos taken by The Washington Post’s photographer.

Although the type is a quite fuzzy and the bottom of the page obscured by Lindell’s coffee cup, the words on the document, line by line, are transcribed as the following.

“… BE TAKEN IMMEDIATELY TO SAVE THE

…him with getting the evidence of ALL the

…in the election and all information regarding

…using people he knows who already have security

…done massive research on these issues

…at Fort Mead [sic]. He is an attorney with cyber-

…expertise and is up to speed on election issues.

…Insurrection Act now as a result of the assault on the

…martial law if necessary upon the first hint of any

…on Foreign Interference in the election. Trigger

…powers. Make clear this is China/Iran

Yes, the message of the note can be inferred to a plan or proposal to invoke the Insurrection Act, employ military resources to stall the election by means of martial law.  What would follow is unknown. The Washington Post further analyzed the meaning of Lindell’s document in an article by Philip Bump.

Since the notes are typed out, and not written freehand, it’s uncertain if this information was to be delivered from another party or if this is Lindell’s writing.

Lindell later said the notes were drawn up by an unnamed attorney, and he was delivering them on the attorney’s behalf. Who the attorney is remains unknown.

In an effort to see the entire document, WaPo’s White House reporter Josh Dawsey Tweeted that he spoke with Lindell about the meeting.

“Talked to Mike Lindell this evening. He said [a] lawyer gave hime notes to share with POTUS but repeatedly wouldn’t say what lawyer. He said he met with Trump for 5-10 minutes and then was referred to counsel’s office. Said the lawyers were “disinterested, very disinterested.”

In a second Tweet stated,
“Lindell said he gave the POTUS this document & also provided [it] to me. Said, falsely, it was clear Biden lost and Trump won — by 11 million votes. Said the truth would one day come out. After meeting with WH lawyers, who he said weren’t interested, he wasn’t let back in to see POTUS.”

Talked to Mike Lindell this evening. He said lawyer gave him notes to share with POTUS but repeatedly wouldn’t say what lawyer. He said he met with Trump for 5-10 minutes and then was referred to counsel’s office. Said the lawyers were “disinterested, very disinterested.” https://t.co/h1iNVxuiPz

Over a series of Tweets, she provided another perspective on the Mike Lindell visit. A summary of the meeting can be found on the New York Times website.

“I got a bit more information about the Lindell meeting. It was a brief meeting, Trump sent him upstairs to the WH counsel’s office to be escorted by an admin official sitting next to Lindell in the meeting. That official, according to another official, was Robert O’Brien.

“Once up there, he insisted on meeting with Cipollone. It got contentious, in part bc supposedly on the blacked-out part of his notes was something about how Cipollone should be fired.

“Lindell tells me that he was carrying the notes for an attorney he’s been working with to prove the election was really won by Trump, wouldn’t say who it was. Said some of it related to reports Trump is now unable to see because he doesn’t have Twitter.

“Lindell insists the papers he was holding, which were photographed and visible, didn’t reference ‘martial law.’ An administration official says they definitely referenced martial law.

“But an administration official says Trump wasn’t really entertaining what Lindell was saying. Lindell also seemed frustrated he wasn’t getting more of a hearing.

“O’Brien, to be clear, was not encouraging this, per administration officials. No one was.

“A second administration official said that O’Brien was called to the meeting after Lindell arrived, because advisers in search of someone who could steer Lindell away couldn’t immediately reach Cipollone.

“Among the items on Lindell’s list was replacing O’Brien. The national security adviser, seeking to end the conversation, said if there was evidence of what he was saying it should go to the White House counsel, and he steered Lindell upstairs to the counsel’s office.

“Officials said Lindell spoke sharply to one of Cipollone’s assistants after he was brought upstairs; Cipollone told him he wouldn’t speak to him until Lindell apologized to her. “

I got a bit more information about the Lindell meeting. It was a brief meeting, Trump sent him upstairs to the WH counsel's office to be escorted by an admin official sitting next to Lindell in the meeting. That official, according to another official, was Robert O'Brien.

Mike Lindell’s version of the Meeting

Giuliani was Spotted at White House on Saturday, 16 January, 2021

Rudy Giuliani at Trump WH today 4 days ahead of the Biden inauguration. pic.twitter.com/HqXLwvjmPl

Liberals have no Complaints with the Wartime Military Build-up in D.C.

For all the hysterics over Trump declaring martial law, Washington, D.C. went on a complete military lock-down over the weekend. And, the media is just smitten with it.

Former White House press secretary Sean Spicer reported Friday night  that the National Guard has set up check points and is asking for ID from everyone leaving downtown Washington, D.C. He stated that he never seen such an action.

The National Guard troop build-up in Washington is nothing less than impressive. In comparison, here’s a list of U.S. military deployments from around the globe.

Additionally, there are thousands of metro police, Secret Service agents, FBI, U.S. Marshals and other federal personnel active in Washington D.C. The District of Columbia’s metro police department, the (MPD) alone, has 3,800 officers on staff.

Spicey, my favourite state department guy, shocked at seeing checkpoints in his own city. Oh spicey, @seanspicer now you get to experience what we do in the middle east. pic.twitter.com/0CmhtErPDk