Josie Barnhart, Candidate in Question: Is this GOP School Board Candidate a Conservative? 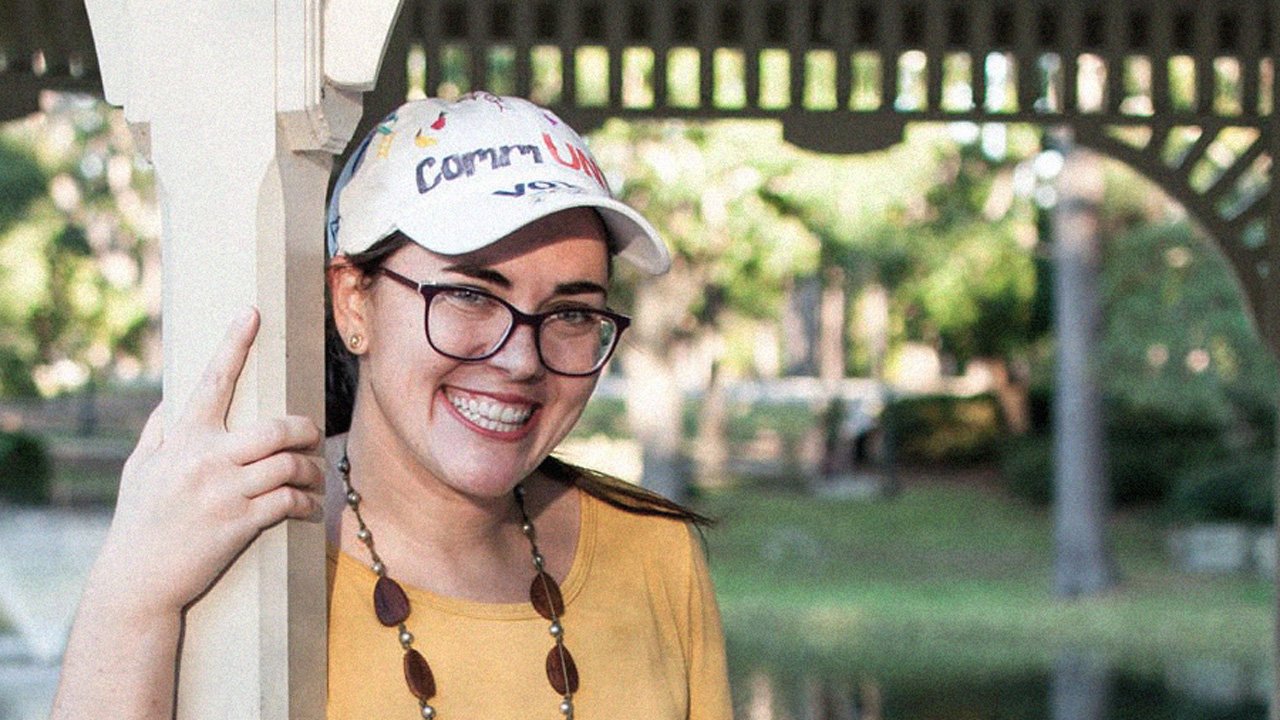 Josie Barhart (photographed above) is running in the 2022 New Hanover Republican primary for School Board. Several outspoken Republicans say Barnhart has failed to adequately state her position on key Conservative issues.

How Conservative is Board of Education Candidate Josie Barnhart?

Since the Fall of last year, when she first announced her candidacy, Josie Barnhart was considered the front-runner in the Republican primary for New Hanover County’s school board. Many made note to her wide appeal and star quality appearances before audiences.

Now, some in conservative circles are calling her Stephanie Kraybill 2.0 — in reference to the recently censured Republican school board member.

New Hanover County voters are angry at how school administrators and teachers are sneaking in ultra-far left indoctrination that is undermining traditional American values. So, why are conservative Republicans so upset with Barnhart? And why are some saying she may be a RINO?

A few weeks ago, questions were posed to GOP school board candidates asking for their stances on Far Left ideas in school curriculum and the bid to terminate the district’s woke superintendent. When every candidate except Josie Barnhart provided solid conservative answers to two key questions, many eyebrows were raised.

Rank-and-file Republicans asked each other:

Where is Josie on these questions?

These stances are cornerstone to the school board race this year; why doesn’t she give solid answers?

Some thought Barnhart didn’t fully understand or maybe misinterpreted the questions asked. So, a few Barnhart supporters reworded and posed the questions again on her Facebook page, and even prompted her with appropriate “conservative” answers within the inquiries. Barnhart’s replies continued to be scattered and tepid; and many times, she avoided answering the questions altogether.

While other GOP school board candidates have no problem providing clear concise answers, Barnhart has difficulty putting forth understandable stances on these questions:

Our team analyzed hours of recordings of Barnhart speaking before audiences. These two questions — the firing of superintendent Foust and the removing of SEL/CRT-related ideologies from schools — have been submitted to Barnhart many times, in different settings. Her answers are confusing and embody woke-like linguistic framing, ambiguity and deflection. No other candidate in the New Hanover GOP Primary responds to questioning in such an opaque fashion.

Critics say Josie Barnhart projects moving poignancy, but lacks credible candor, and that she gives little weight to the dangers of  CRT/SEL instituted in our schools.

When broached on SEL-related stances (CRT, SEL, EDI, intersectionality, sexual grooming, etc…), chants of “curriculum transparency” and “parents’ right to know” are Barnhart’s rhetorical mainstays. She often cites and describes conversations she’s had with ‘parents’  and ‘community members’ about hot-topic issues. And with these anecdotal recounts, she charmingly muddles her answers through morality-based storytelling, which allows her to sidestep the act of providing an actual position.

When asked to share her stance on the removal of Superintendent Foust, Barnhart adheres to, “there needs to be a change of leadership.” However, even when pressed, she refuses to delineate which leaders need to be given a pink slip.

Competing GOP school board candidate Chris Sutton challenged Barnhart for not providing voters a position statement on Dr. Foust and supporting the expansion of EDI:
“Where we disagree is EDI and the superintendent.

“Josie wants to incorporate more parents and faculty into the EDI committee (Her words not mine). This is how people like Leslie Cohen gets on a board and pushes for things like removing the definition of gender from our books.  Hard pass. 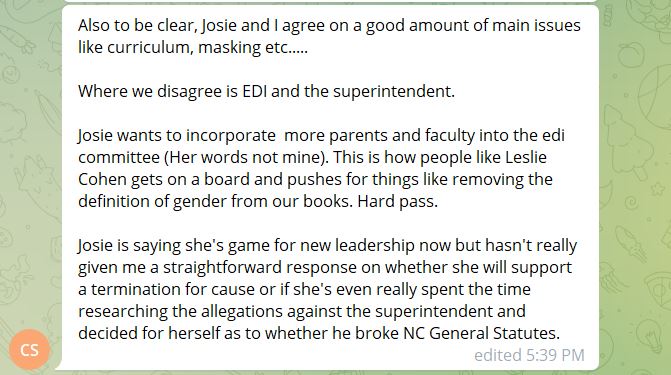 Screenshot (above) is a comment from fellow Republican school board candidate Chris Sutton on a Telegram channel. He is one of many New Hanover County Republicans wondering why Barnhart will not say where she stands on these issues, one way or the other.

Linguistic Framing is a term used to describe how someone communicates a concept, situation or scenario, in an understandable way. It’s important to learn how to recognize certain types of framing because proponents of SEL, like CRT and Intersectionality, extensively employ analogies, similes and metaphors as go-to rhetorical devices; their label for this is Counter-storytelling. Leftists readily admit they use counter-storytelling to challenge conventionally-held beliefs and promote their own narratives. The CRT training method Groundwater Approach is an example of counter-storytelling.

Whether consciously or subsconsiously, Candidate Josie Barnhart uses storytelling in a similar manner when addressing audiences. She’s the sole GOP candidate in the 2022 election who employs this type of rhetorical tool.

Our research leads us to believe it is possible Barnhart supports the district’s integration of Equity, Diversity and Inclusion (EDI) — also known as ‘DEI’. It seems the only thing she clearly disagrees with under the ‘equity’ umbrella is the grading policy. As for the other items she brings up that fall under the EDI umbrella, her positions are ambiguous.

Knowing the stance all candidates have on ‘equity’ is important because EDI is one of the Far Left’s primary conduits for spreading Leftist ideology throughout public schools.

The following video is an interview with Josie Barnhart on Nick Craig’s radio show. This interview reveals that although Barnhart doesn’t support the school district’s current EDI Committee, she supports a revised version of it: seemingly one with only teachers, and one that excludes anyone from outside of the classroom. The interview also shows an example of how Barnhart uses morality-based storytelling to make the listener doubt the Far Left’s well-established definition of “equity.” She likens “equity” to kids receiving hot-lunches in school cafeterias, downplaying the significance of how ‘equity’ harms kids.

In this video (above), GOP school board candidate Josie Barnhart employs a woke-like storytelling technique to challenge the audience’s understanding of equity.
Contrary to Barnhart’s claim in the interview that “equity” isn’t defined and people have different definitions for “equity,” the definition is well-established and there should be no confusion about its meaning with respect to its use in the school system.

The Heritage Foundation has published several articles on Diversity, Inclusion and Equity (also known as EDI or DEI) in public education. Radical Leftists in school districts, including NHCS, guise Critical Race Theory (CRT) and other off-shoots from Critical Theory (CT) by using EDI and Social Emotional Learning (SEL) as their ideological weapons of choice. The following is a sampling of reports from Heritage on the topic:

During the Q&A part of Barnhart’s interview with the NHRLC, she used rhetorical tools of avoidance, deflection and storytelling to talk about ‘transparency’ and ‘curriculum’ when the question actually asked was about CRT. After she completed a lengthy discombobulated answer, the audience member knew she didn’t address the question and asked for her opinion on CRT a second time. Barnhart then downplayed the significance of CRT in the school system when she said, “I think it does a disservice to us,” and said nothing more.

The following is a transcript of Josie’s initial answer about CRT. It’s a head-scratcher:

“What is your opinion of CRT?”

“CRT. So what I hear– what I hear when I talk to people about that is the curriculum, transparency and accountability. And I do not believe that we have a good plan for that right now. And I will say, I– when the new standards dropped for our history that passed this summer, I was very outspoken without working with our curriculum director about it. You’d be surprised at some of the digging that I have found, and I have expressed that I’m going to continue to express that we need to have. I suggest, a website curriculum that all parents can access content. So that’s not happening right now. Right now, it’s just being told, ‘oh, it’s not being taught.’ But we don’t have access to it. So, we can’t verify or deny that. And so, I think what we need to talk about is the goal let’s say, hey, let’s let people see what our kids are teaching, because that has been the pushback that I have seen in the– in the school system that we’re actually not really being forthcoming with what’s being taught. And it comes down to, ‘well, just go talk to your teacher.’ Well, that’s a lot of work to put on them, you know, to make copies, to send it to you, like, hey, this is what we’re learning. And so, if the district is more intentional about saying, being very clear with what we are learning, then I think people are going to have a better understanding and we can, we can hammer it down a little bit more on what they’re saying is. If that makes sense.”

Watch the following video to see Barnhart’s complete exchange on CRT. Consistently providing answers like she did with the Liberty Caucus is why New Hanover County conservatives have doubts about Josie as a school board candidate.

Comments from other New Hanover School Board Candidates on CRT

Candidate Pat Bradford made a resolute position on CRT in her recent interview with Port City Daily. This firm statement is the type Barnhart is avoiding.
” …we must reset the curriculum. Critical race theory is the systematic, orchestrated, well-funded attack on our cultural values. It is unthinkable that this ideology is being taught in America. Teachers and parents report it is being taught in New Hanover County. The new school board must pass policies that eliminate CRT from all school curriculum.”

Like Bradford, the other GOP school board candidates have also taken a clear position against CRT. The following are audio clips from the other three candidates.

"Critical Race Theory is toxic, it is Marxist, it is divisive, and it is being taught in our schools... we need to remove every aspect of this toxin out of our curriculum."

Mere days after appearing on Nick Craig’s show where she said no one outside of the school system should be a member of the district’s EDI committee, Josie published on her campaign Facebook page the following promo asking parents to join New Hanover School District’s new EDI workgroup for parents. She completely avoids posting any criticism that this new EDI group further entrenches Far Left ideals into the school system.

While many in our community may understand the dangers of Critical Race Theory, there is a more alarming pedagogy already implemented in public and private schools called Social Emotional Learning (SEL). Even home schooling tutors employ this framework.

SEL was devised by CASEL, a nonprofit organization based out of Illinois. It is the leader in creating and implementing new SEL standards.

The State of North Carolina has already rolled out its own version of SEL across the state called ‘NCSEL‘.

The following is a recording from a CASEL conference on SEL. Here, the presenters provide an overview of SEL and where they’ll be taking SEL standards in the future. These SEL speakers eerily sound like they’ve picked up right where Jim Jones left off. Judge for yourself.

The Movement to Rid Schools of Equity, Diversity and Inclusion

Many states have come out swinging against SEL/CRT in the last several months. Florida and Virginia have banned the teaching of this ideology. And even the liberal city of San Francisco recalled three of their school board members for pushing ridiculous “equity” mandates across their school district. San Francisco voters overwhelmingly voted to replace these members by margins that exceeded 70% . The Atlantic also reported the reason only three members were recalled was because the other board members hadn’t served in office long enough to qualify for a recall vote.

The lefties of San Francisco understand the dangers of CRT and overwhelmingly voted to get rid of its implementation in their schools. If this is a winning issue on both sides of the political isle, why isn’t Josie Barnhart capitalizing on it? Why is her messaging structured to be vague and why does she downplay a strong stance against failing Far Left education policies? Conservative voters in New Hanover County deserve to know.