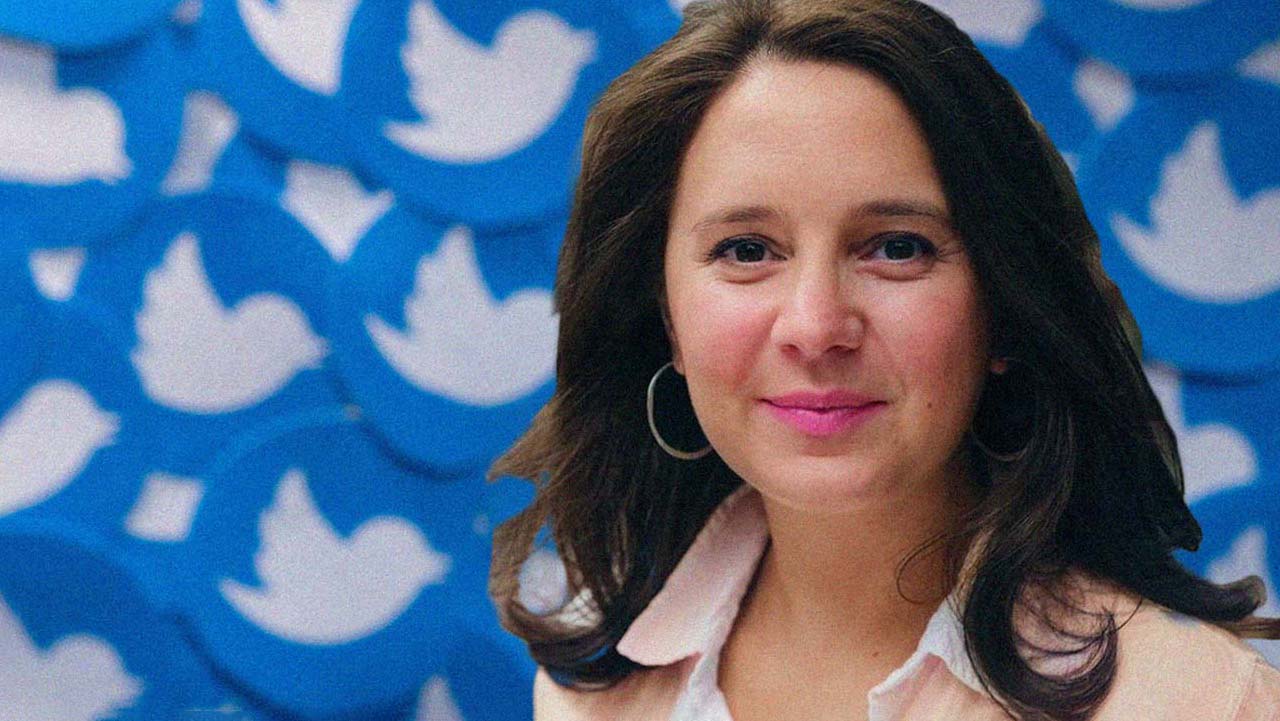 Last week, Insider reported that Bari Weiss — along with Matt Taibbi — were handpicked by Elon Musk to investigate internal Twitter material because “both abandoned high-profile roles to pursue their own reporting, and are scathing critics of established outlets in their Substack newsletters.”

Part 2 of the The Twitter Files, by Bari Weiss, reveals that Twitter, under pre-Musk leadership, morphed into a ministry of censorship for the Democratic Party.

Weiss is one of the journalists investigating Twitter corruption and authored the Part 2 of The Twitter Files. Weiss is the founder and editor of The Free Press. From 2017 to 2020, she was a political opinion writer and editor at The New York Times. 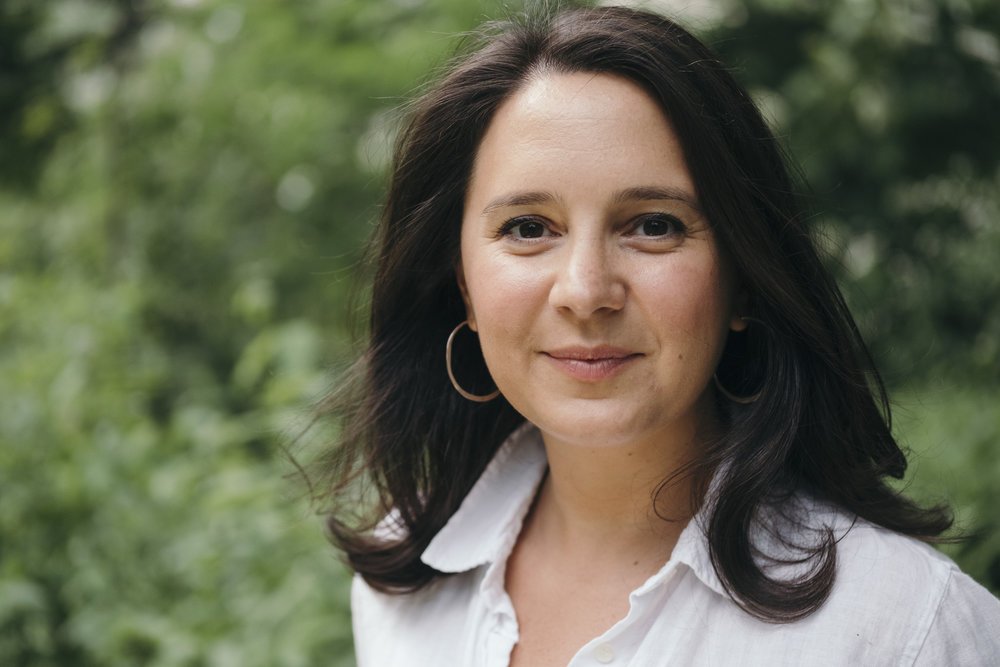 The following are quotes directly from Weiss’ series of tweets for Part 2.

1. A new #TwitterFiles investigation reveals that teams of Twitter employees build blacklists, prevent disfavored tweets from trending, and actively limit the visibility of entire accounts or even trending topics—all in secret, without informing users.

2. Twitter once had a mission “to give everyone the power to create and share ideas and information instantly, without barriers.” Along the way, barriers nevertheless were erected.

3. Take, for example, Stanford’s Dr. Jay Bhattacharya (@DrJBhattacharya) who argued that Covid lockdowns would harm children. Twitter secretly placed him on a “Trends Blacklist,” which prevented his tweets from trending. 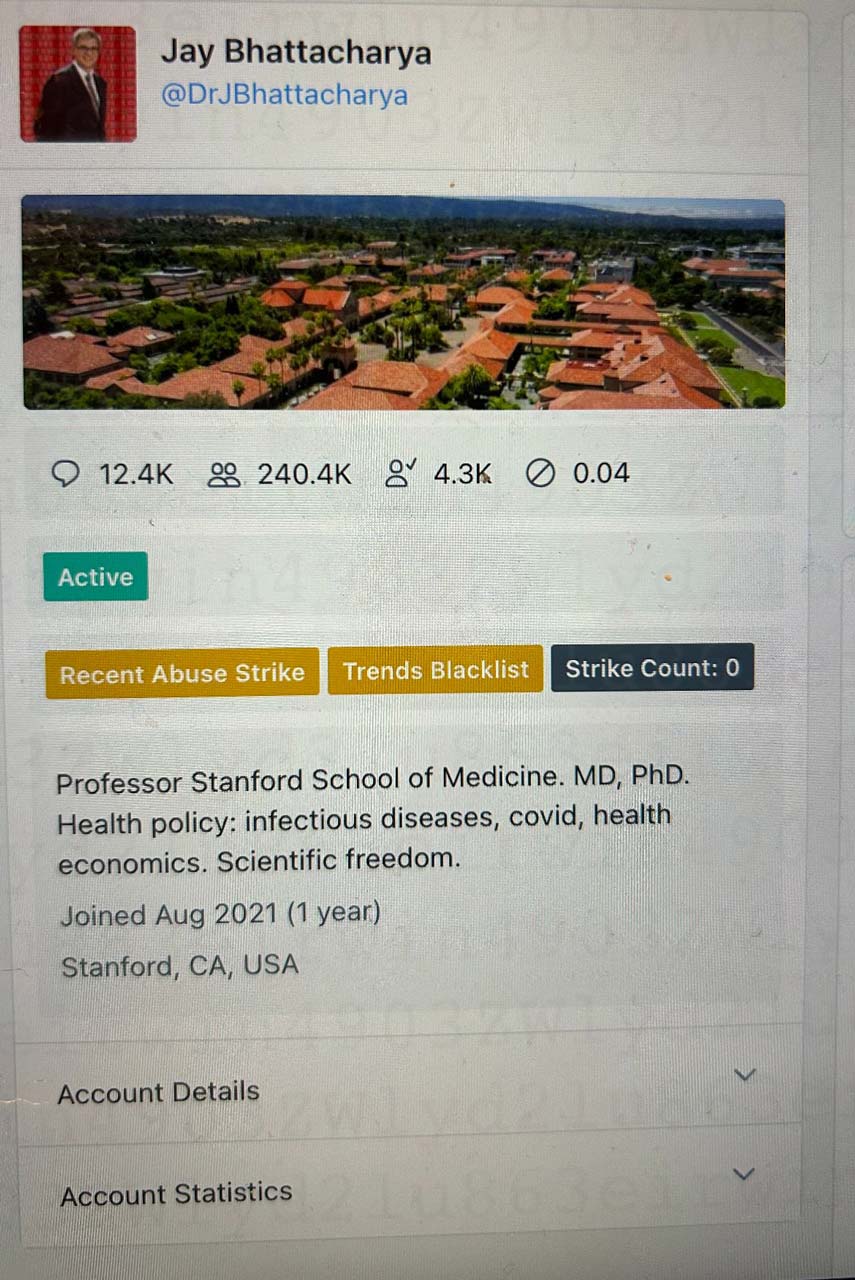 4. Or consider the popular right-wing talk show host, Dan Bongino (@dbongino), who at one point was slapped with a “Search Blacklist.” 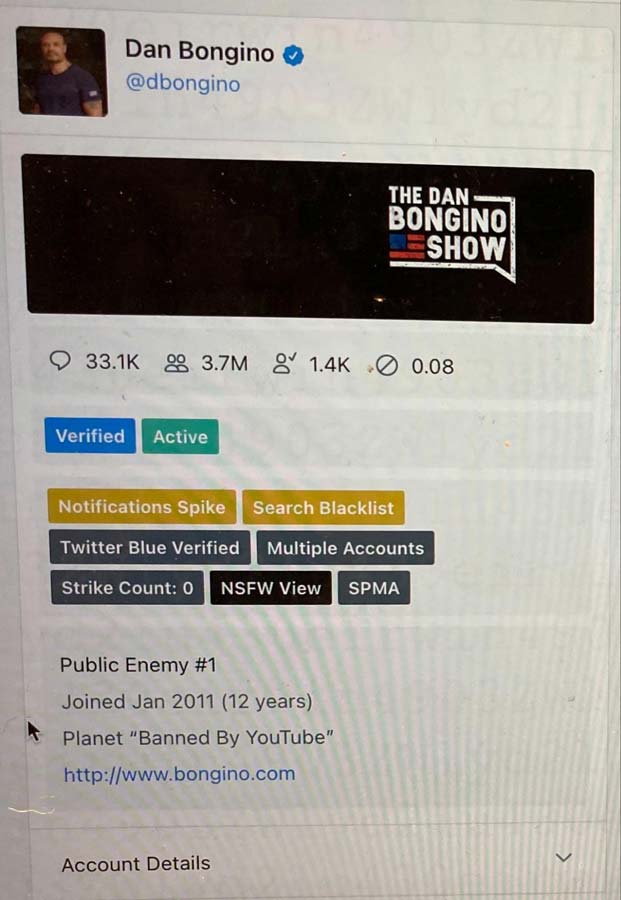 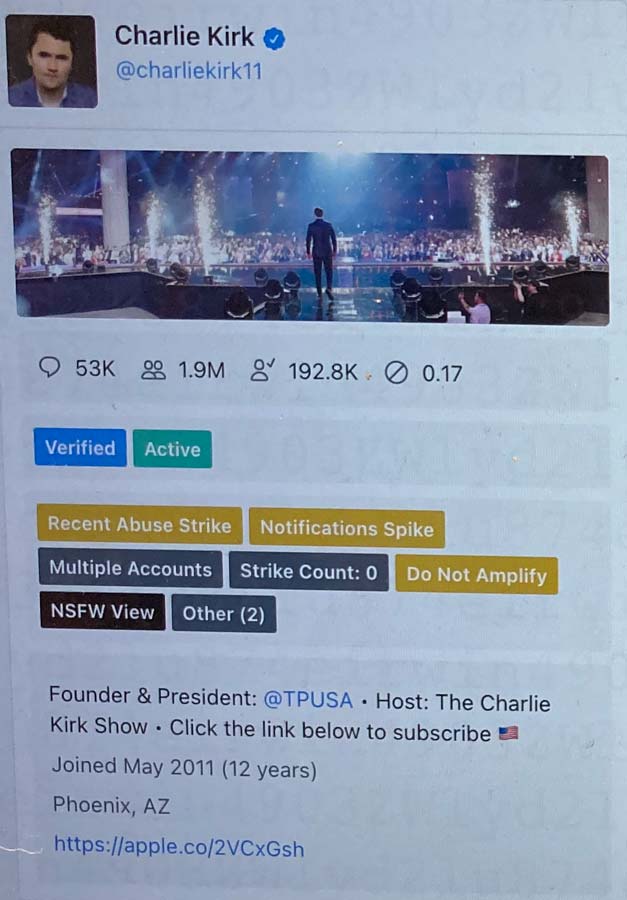 6. Twitter denied that it does such things. In 2018, Twitter’s Vijaya Gadde (then Head of Legal Policy and Trust) and Kayvon Beykpour (Head of Product) said: “We do not shadow ban.” They added: “And we certainly don’t shadow ban based on political viewpoints or ideology.”

8. “Think about visibility filtering as being a way for us to suppress what people see to different levels. It’s a very powerful tool,” one senior Twitter employee told us.

9. “VF” refers to Twitter’s control over user visibility. It used VF to block searches of individual users; to limit the scope of a particular tweet’s discoverability; to block select users’ posts from ever appearing on the “trending” page; and from inclusion in hashtag searches.

10. All without users’ knowledge.

12. The group that decided whether to limit the reach of certain users was the Strategic Response Team – Global Escalation Team, or SRT-GET. It often handled up to 200 “cases” a day.

13. But there existed a level beyond official ticketing, beyond the rank-and-file moderators following the company’s policy on paper. That is the “Site Integrity Policy, Policy Escalation Support,” known as “SIP-PES.”

15. This is where the biggest, most politically sensitive decisions got made. “Think high follower account, controversial,” another Twitter employee told us. For these “there would be no ticket or anything.”

16. One of the accounts that rose to this level of scrutiny was @libsoftiktok —an account that was on the “Trends Blacklist” and was designated as “Do Not Take Action on User Without Consulting With SIP-PES.” 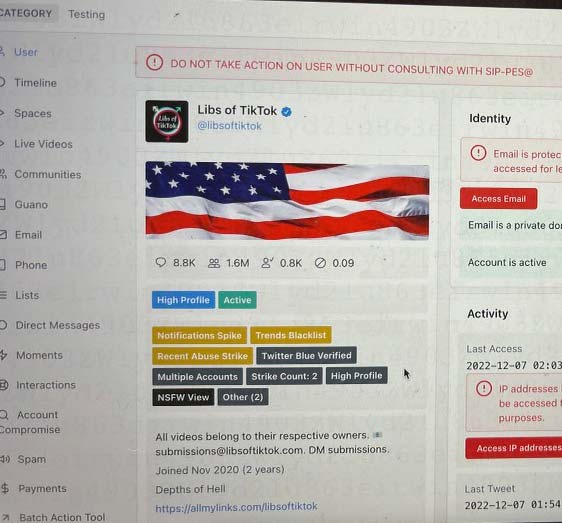 17. The account—which Chaya Raichik began in November 2020 and now boasts over 1.4 million followers—was subjected to six suspensions in 2022 alone, Raichik says. Each time, Raichik was blocked from posting for as long as a week.

19. But in an internal SIP-PES memo from October 2022, after her seventh suspension, the committee acknowledged that “LTT has not directly engaged in behavior violative of the Hateful Conduct policy.” See here:

20. The committee justified her suspensions internally by claiming her posts encouraged online harassment of “hospitals and medical providers” by insinuating “that gender-affirming healthcare is equivalent to child abuse or grooming.”

21. Compare this to what happened when Raichik herself was doxxed on November

22. When Raichik told Twitter that her address had been disseminated she says Twitter Support responded with this message: “We reviewed the reported content, and didn’t find it to be in violation of the Twitter rules.” No action was taken. The doxxing tweet is still up.

23. In internal Slack messages, Twitter employees spoke of using technicalities to restrict the visibility of tweets and subjects. Here’s Yoel Roth, Twitter’s then Global Head of Trust & Safety, in a direct message to a colleague in early 2021:

25. Roth wrote: “The hypothesis underlying much of what we’ve implemented is that if exposure to, e.g., misinformation directly causes harm, we should use remediations that reduce exposure, and limiting the spread/virality of content is a good way to do that.”

26. He added: “We got Jack on board with implementing this for civic integrity in the near term, but we’re going to need to make a more robust case to get this into our repertoire of policy remediations – especially for other policy domains.”

27. There is more to come on this story, which was reported by @abigailshrier @shellenbergermd @nelliebowles @isaacgrafstein and the team The Free Press @thefp.

Keep up with this unfolding story here and at our brand new website: thefp.com.

28. The authors have broad and expanding access to Twitter’s files. The only condition we agreed to was that the material would first be published on Twitter.

29. We’re just getting started on our reporting. Documents cannot tell the whole story here. A big thank you to everyone who has spoken to us so far. If you are a current or former Twitter employee, we’d love to hear from you. Please write to: [email protected]

30. Watch @mtaibbi for the next installment.