Matt Taibbi: The Twitter Files Part 3: The Removal of Donald Trump I 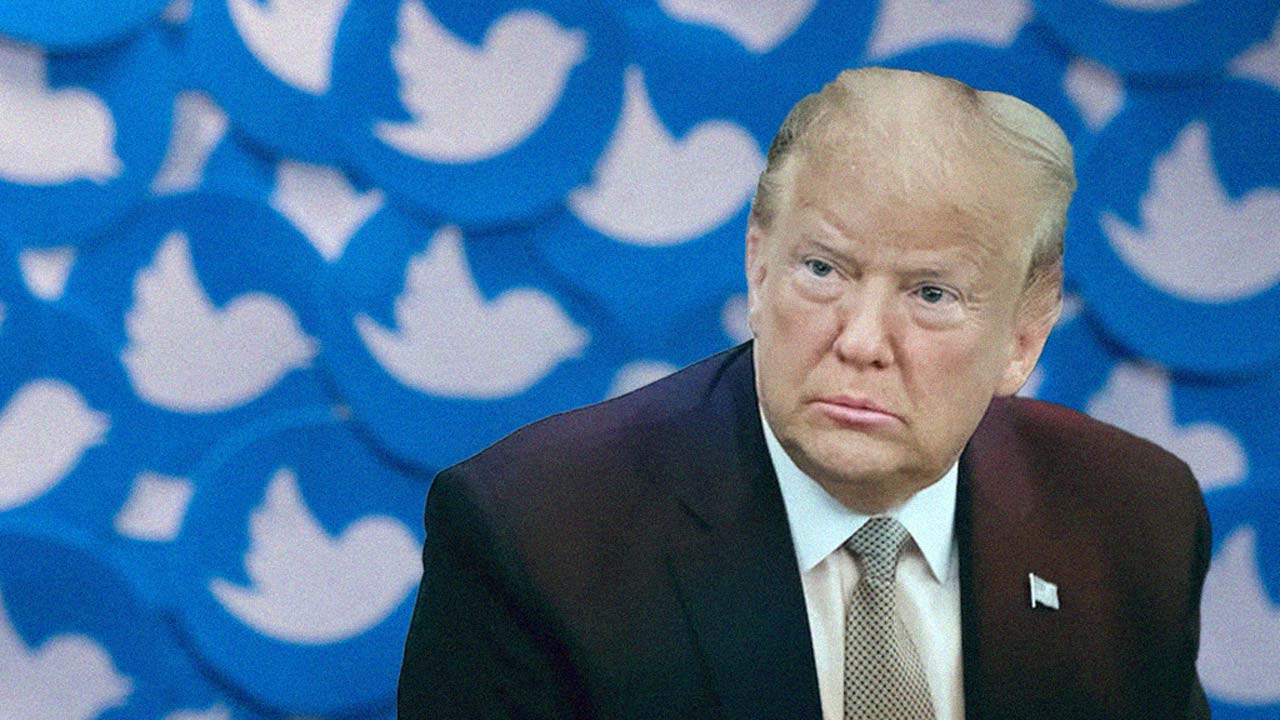 Removal of Donald Trump, Part 1 of 3

Next is three-part series from The Twitter Files on the complete ban of President Donald Trump from the platform. This release was authored by Matt Taibbi.

Takeaways from The Removal of Donald Trump, Part 1:

Twitter Files Part 3: The Removal of Donald Trump (1 of 3)

2. The world knows much of the story of what happened between riots at the Capitol on January 6th, and the removal of President Donald Trump from Twitter on January 8th…

3. We’ll show you what hasn’t been revealed: the erosion of standards within the company in months before J6, decisions by high-ranking executives to violate their own policies, and more, against the backdrop of ongoing, documented interaction with federal agencies.

4. This first installment covers the period before the election through January 6th. Tomorrow, @Shellenbergermd will detail the chaos inside Twitter on January 7th. On Sunday, @BariWeiss will reveal the secret internal communications from the key date of January 8th.

5. Whatever your opinion on the decision to remove Trump that day, the internal communications at Twitter between January 6th-January 8th have clear historical import. Even Twitter’s employees understood in the moment it was a landmark moment in the annals of speech.

6. As soon as they finished banning Trump, Twitter execs started processing new power. They prepared to ban future presidents and White Houses – perhaps even Joe Biden. The “new administration,” says one exec, “will not be suspended by Twitter unless absolutely necessary.” 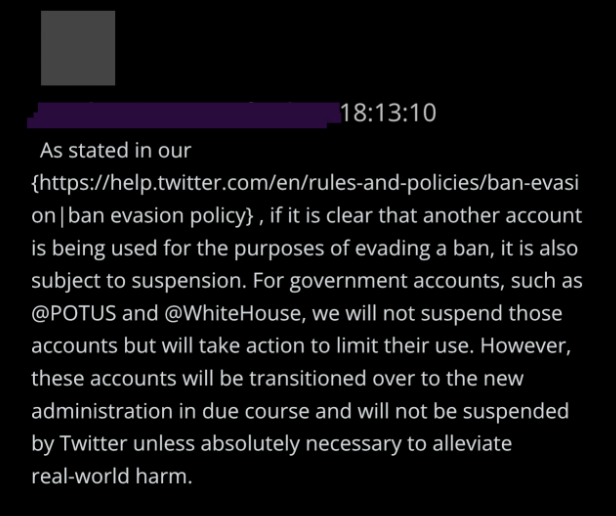 7. Twitter executives removed Trump in part over what one executive called the “context surrounding”: actions by Trump and supporters “over the course of the election and frankly last 4+ years.” In the end, they looked at a broad picture. But that approach can cut both ways. 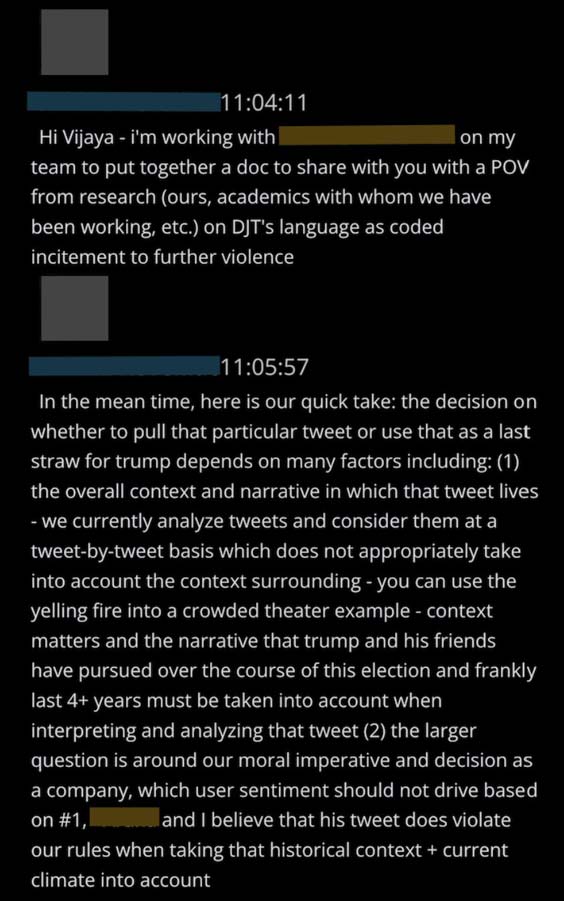 8. The bulk of the internal debate leading to Trump’s ban took place in those three January days. However, the intellectual framework was laid in the months preceding the Capitol riots.

9. Before J6, Twitter was a unique mix of automated, rules-based enforcement, and more subjective moderation by senior executives. As @BariWeiss reported, the firm had a vast array of tools for manipulating visibility, most all of which were thrown at Trump (and others) pre-J6.

10. As the election approached, senior executives – perhaps under pressure from federal agencies, with whom they met more as time progressed – increasingly struggled with rules, and began to speak of “vios” as pretexts to do what they’d likely have done anyway. 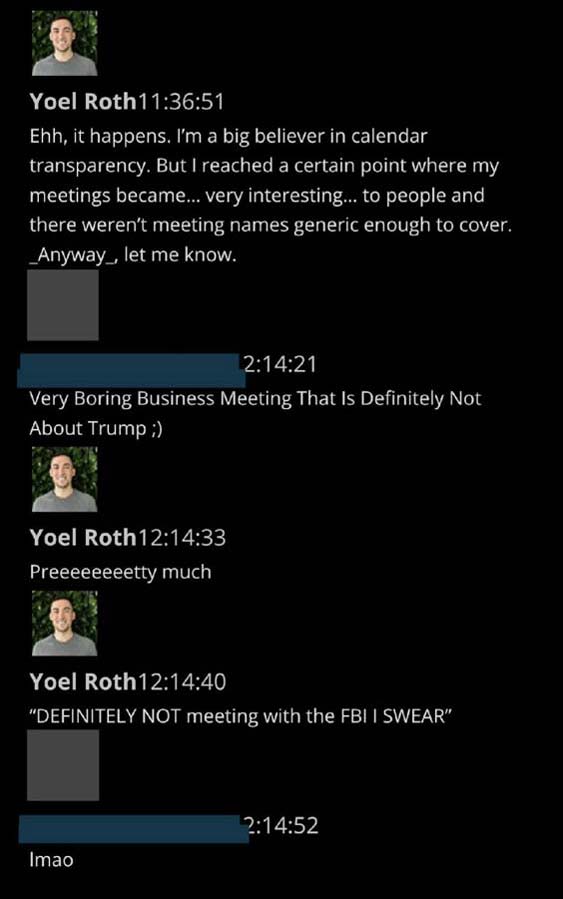 12. These initial reports are based on searches for docs linked to prominent executives, whose names are already public. They include Roth, former trust and policy chief Vijaya Gadde, and recently plank-walked Deputy General Counsel (and former top FBI lawyer) Jim Baker.

13. One particular slack channel offers an unique window into the evolving thinking of top officials in late 2020 and early 2021.

14. On October 8th, 2020, executives opened a channel called “us2020_xfn_enforcement.” Through J6, this would be home for discussions about election-related removals, especially ones that involved “high-profile” accounts (often called “VITs” or “Very Important Tweeters”). 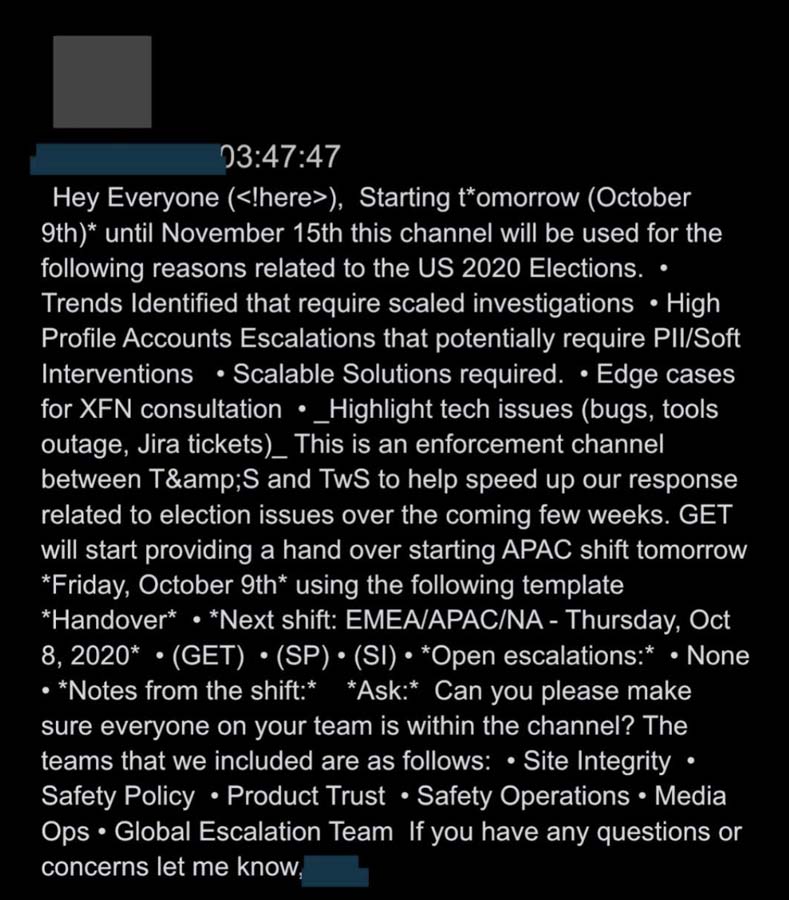 16. The latter group were a high-speed Supreme Court of moderation, issuing content rulings on the fly, often in minutes and based on guesses, gut calls, even Google searches, even in cases involving the President.

17. During this time, executives were also clearly liaising with federal enforcement and intelligence agencies about moderation of election-related content. While we’re still at the start of reviewing the #TwitterFiles, we’re finding out more about these interactions every day.

18. Policy Director Nick Pickles is asked if they should say Twitter detects “misinfo” through “ML, human review, and **partnerships with outside experts?*” The employee asks, “I know that’s been a slippery process… not sure if you want our public explanation to hang on that.” 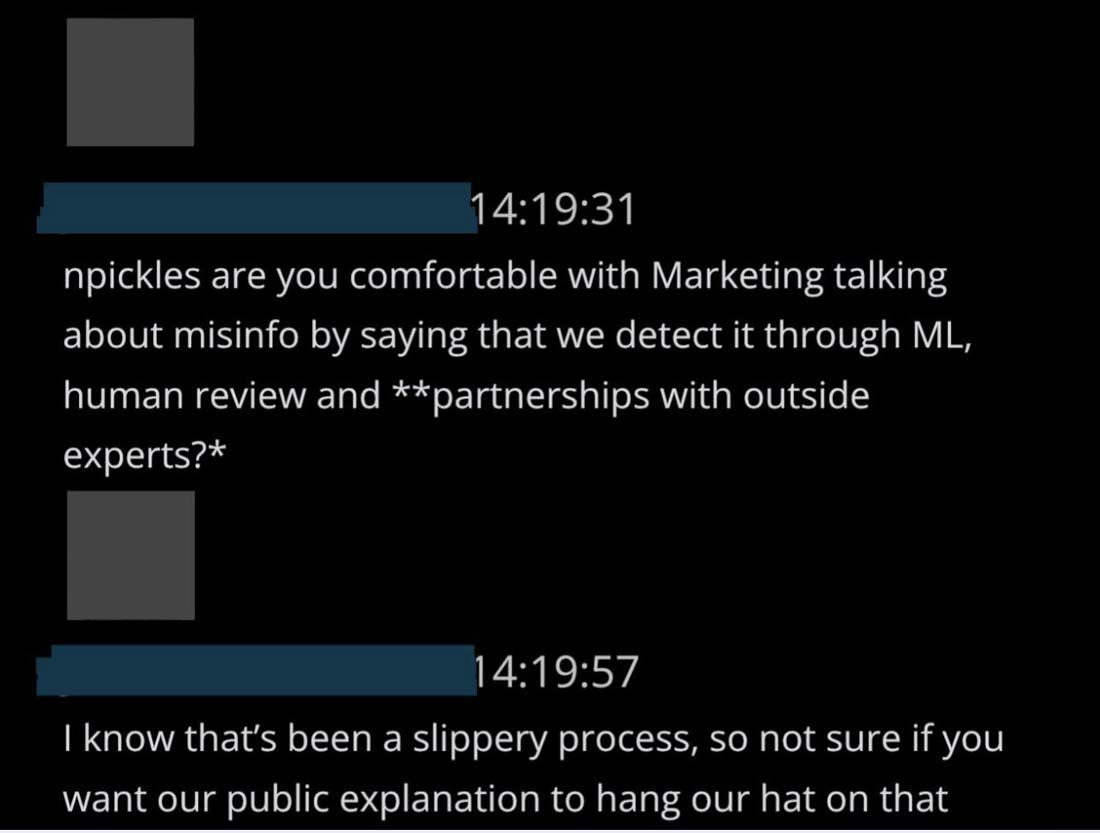 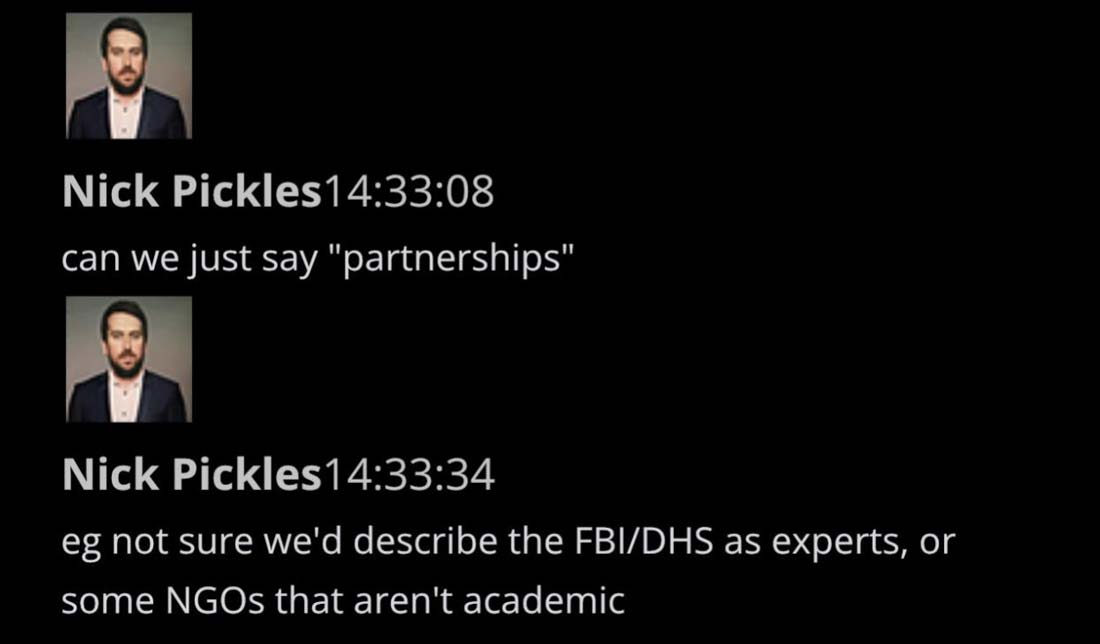 19. Pickles quickly asks if they could “just say “partnerships.” After a pause, he says, “e.g. not sure we’d describe the FBI/DHS as experts.”

20. This post about the Hunter Biden laptop situation shows that Roth not only met weekly with the FBI and DHS, but with the Office of the Director of National Intelligence (DNI): 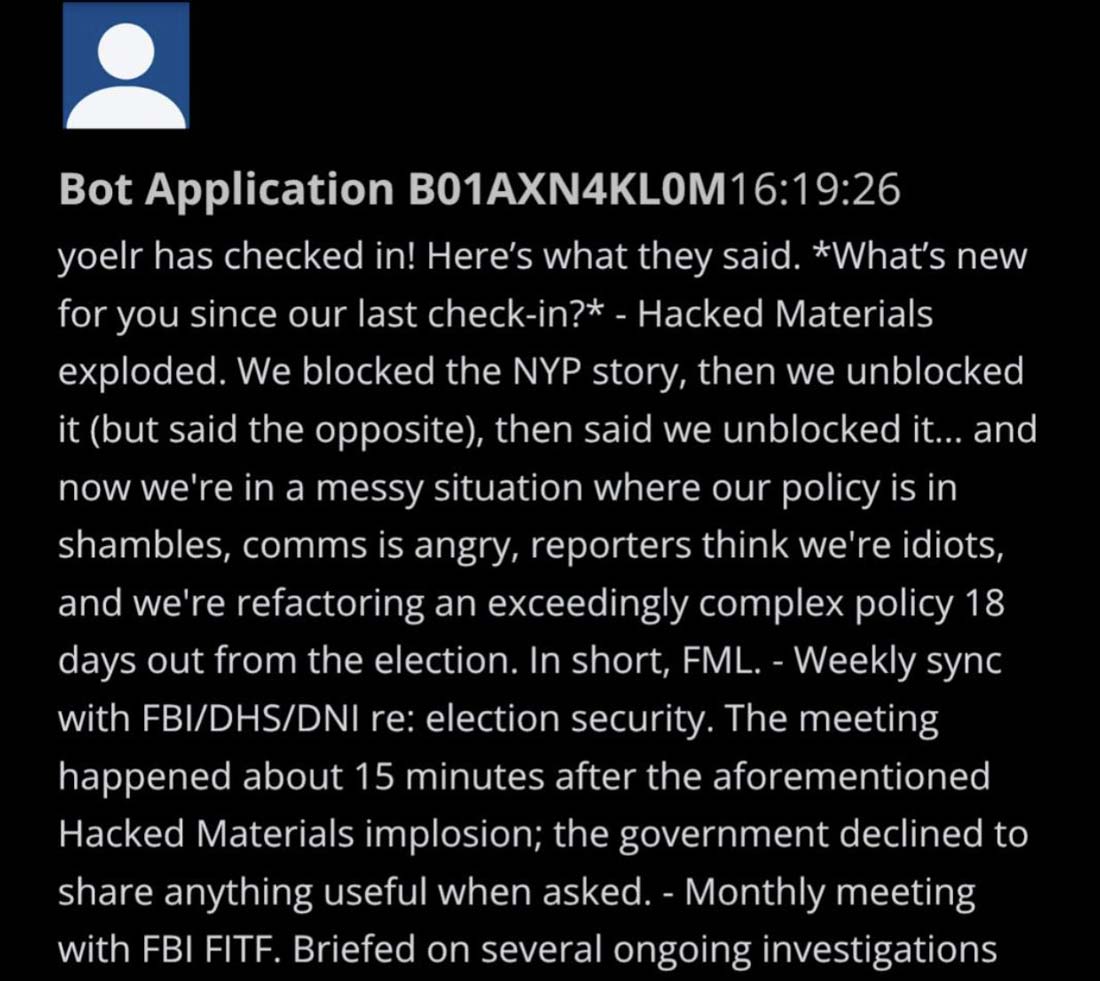 21. Roth’s report to FBI/DHS/DNI is almost farcical in its self-flagellating tone:
“We blocked the NYP story, then unblocked it (but said the opposite)… comms is angry, reporters think we’re idiots… in short, FML” (fuck my life).

23. Some of Roth’s later Slacks indicate his weekly confabs with federal law enforcement involved separate meetings. Here, he ghosts the FBI and DHS, respectively, to go first to an “Aspen Institute thing,” then take a call with Apple. 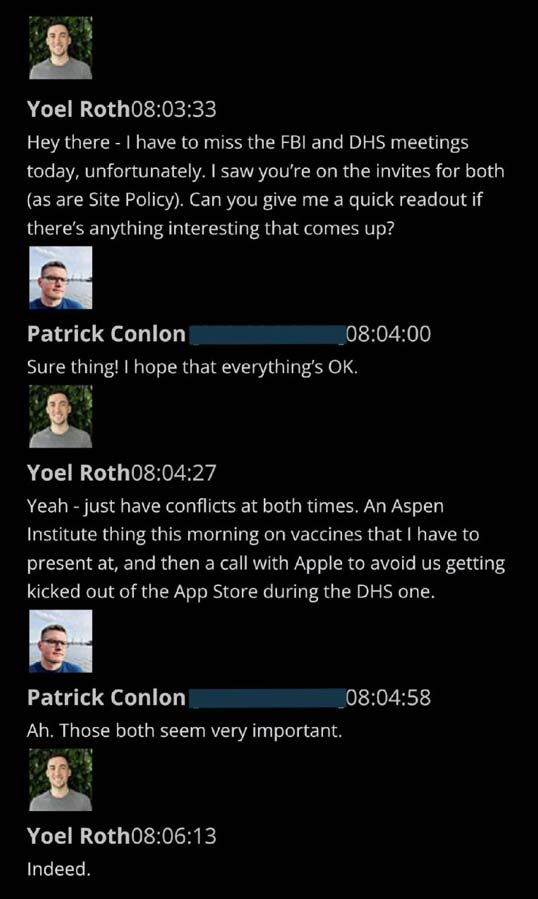 24. Here, the FBI sends reports about a pair of tweets, the second of which involves a former Tippecanoe County, Indiana Councilor and Republican named @JohnBasham claiming “Between 2% and 25% of Ballots by Mail are Being Rejected for Errors.” 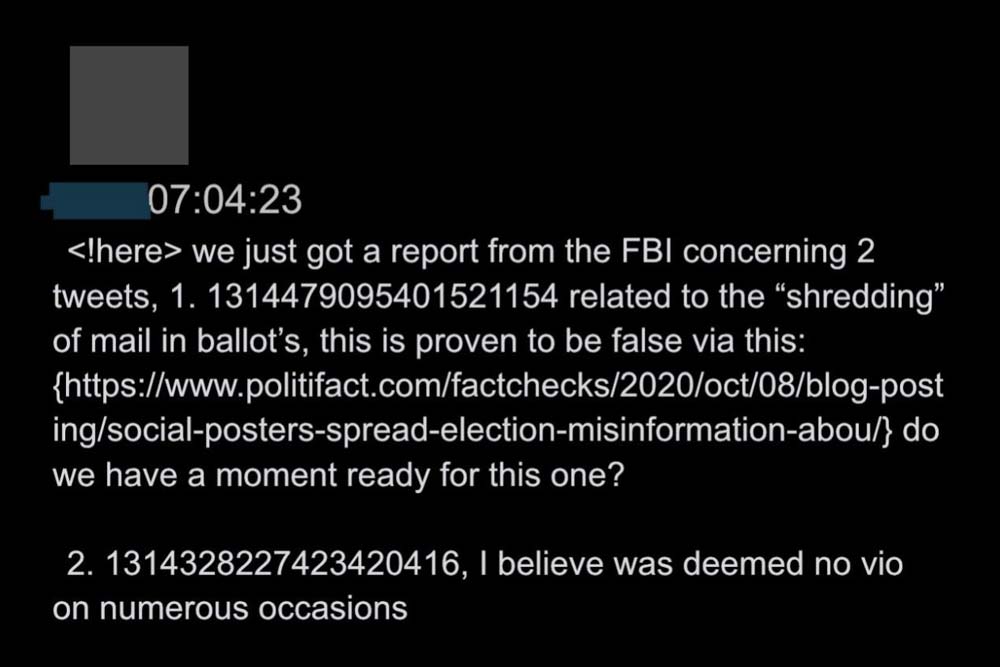 The FBI’s second report concerned this tweet by @JohnBasham: 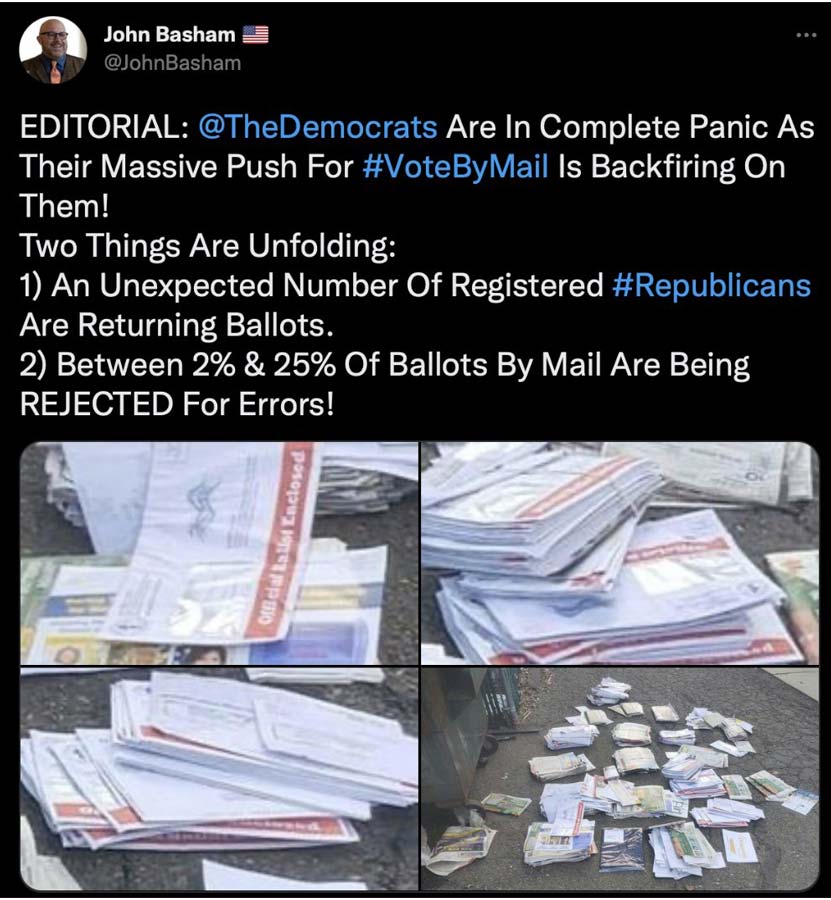 25. The FBI-flagged tweet then got circulated in the enforcement Slack. Twitter cited Politifact to say the first story was “proven to be false,” then noted the second was already deemed “no vio on numerous occasions.”

26. The group then decides to apply a “Learn how voting is safe and secure” label because one commenter says, “it’s totally normal to have a 2% error rate.” Roth then gives the final go-ahead to the process initiated by the FBI:

27. Examining the entire election enforcement Slack, we didn’t see one reference to moderation requests from the Trump campaign, the Trump White House, or Republicans generally. We looked. They may exist: we were told they do. However, they were absent here.