What’s the Best Return on Investment for College? 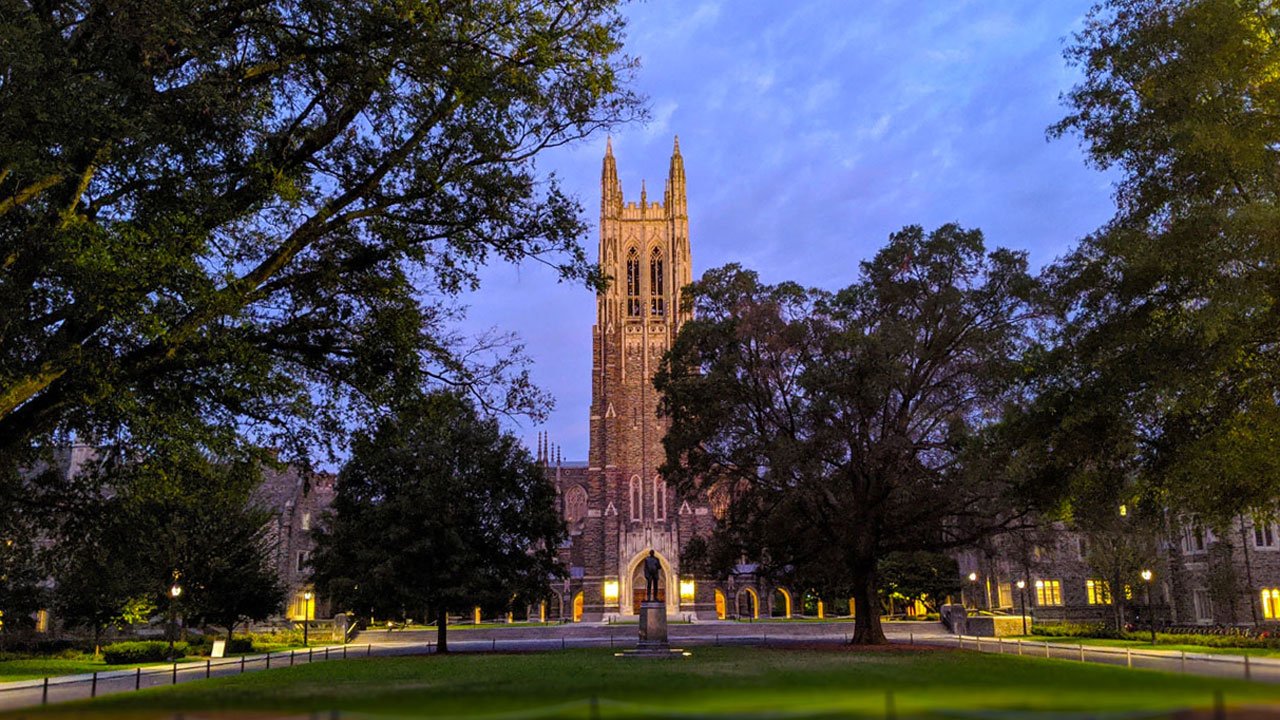 Make the Right Decisions for College, Get the Biggest Bang for your Buck

Autumn is college application season for high school seniors. And with the growing price tag that comes with 4-year schools, many students and parents are scrutinizing the return on investment (ROI) associated with higher education.

“When we graduate [college], reality hits. When you are barely managing to pay your bills, your paycheck might become more important,” says Sinem Buber, ZipRecruiter’s lead economist.

The Value of a College Major

When entry-level pay is broken down by areas of study for graduates, the salary levels are remarkably skewed: STEM disciplines earn the most right out of college. Data from the National Association of College and Employers show that the average starting salary in 2018 for those holding an Engineering BA degree was significantly higher than those with a Humanities degree — $69.2K versus $56.7K.

Below: Average starting salaries by major for those with bachelor’s degree. (Source: National Association of Colleges and Employers via CNBC) 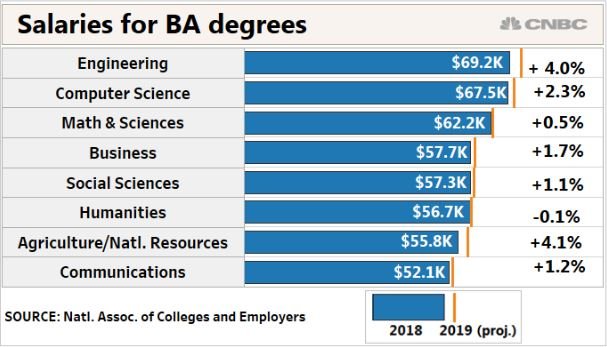 Students should pick their majors wisely. The salary disparity across chosen majors has a long-term abrading effect on certain degree-holders; many later regret their choice of major because of poor salary potential. A ZipRecruiter report published this month (November 2022) presents the most loved and the most regretted majors. The report stated:

“Job seekers’ feelings about their college majors are strongly tied to their job prospects later. Computer science graduates are in high demand across a wide range of industries, from science to tech to consulting and management. They are securing highly paid jobs, with an average annual salary of almost $100K, according to BLS [U.S. Bureau of Labor Statistics].

“Within each field, the most highly paid respondents are much more likely to be happy about their college major choice. Among communications graduates, grads who are happy about their field are earning 1.6 times more than those who would choose a different major. The same goes for marketing management and research grads: those who are satisfied with their major choice are making 3 times more than those with regrets.

Below: The top 10 most regret-free college majors. Source: ZipRecruiter
(click to enlarge) 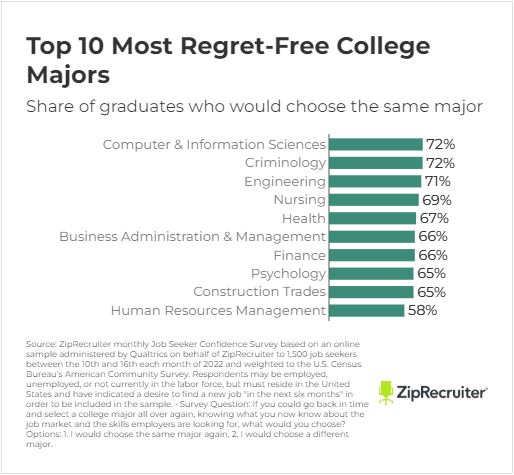 Below: The top 10 most regretted college majors. Source: ZipRecruiter
(click to enlarge) 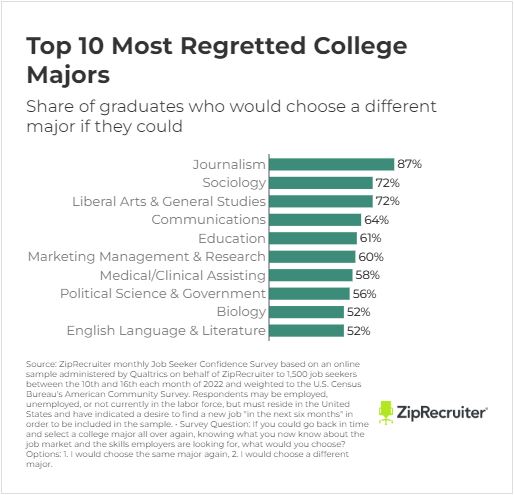 Is College Still Worth the Cost?

The Georgetown University report not only examined lifetime earnings by education levels, but also earnings by occupation, age, race/ethnicity, and gender.  The authors of the paper conclude that a college degree is crucial to lifelong economic opportunities, showing much higher earnings on average for college graduates.

Below: Average lifetime earnings with bachelor’s degree compared to other education levels. (Source: Georgetown University, Center on Education and the Workforce report, The College Payoff)

Many in the education industry now tell students looking a higher education to get the best value for their money by researching the cost-reward equation on the field of study (the Major) and the institution (College or University) issuing the degree.

Below: Examples of how different degrees pay across occupation groups. (Source: Georgetown University, Center on Education and the Workforce report, The College Payoff) 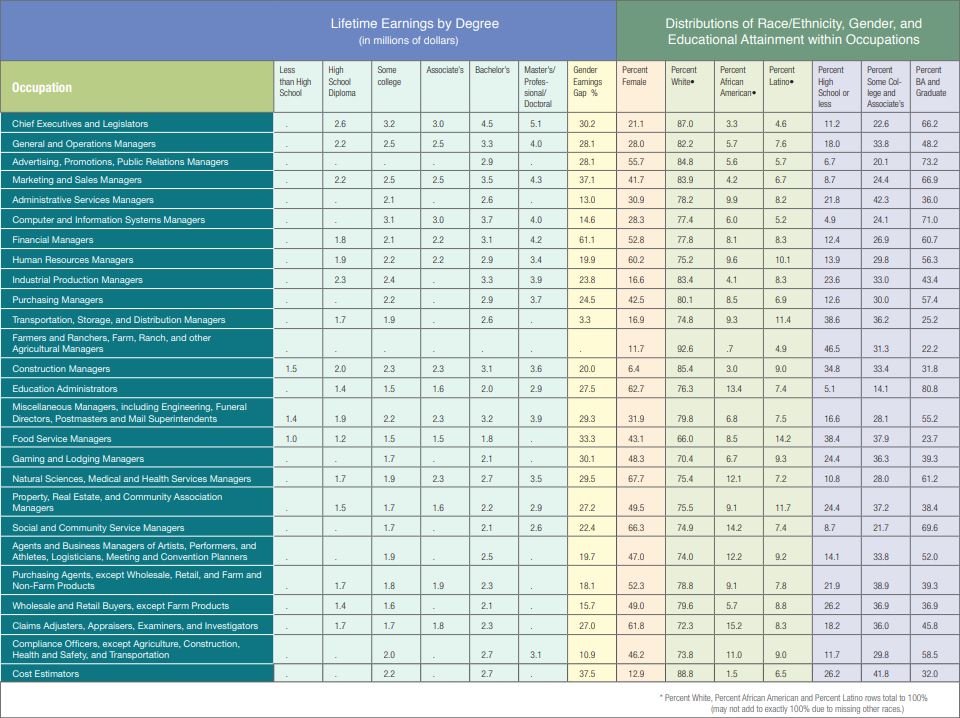 Determining the average lifetime income based on a major is one thing, but does it matter where the degree comes from? Can a degree from one college be more valuable than from another college? Conventional wisdom is likely to show that a job candidate with an Ivy League diploma is more likely to beat out a State University graduate.

But does a degree from a State University or small private college have better value?

Answer: in many cases, it does.

The ROI on Specific Colleges

Georgetown has another report called Ranking 4,500 Colleges by ROI (2022). This is a return on investment scorecard based on colleges and universities attended. This report ranks schools by average earnings every ten years after graduation (10, 20, 30, and 40-year milestones) and compares income against the cost of attendance (tuition, fees, books, living expenses, minus any aid provided to students).

The Current Job Market is as Good as Ever

For recent and soon-to-be college grads, there is great news. Even with media reports of a possible recession, there is a serious labor shortage with a very strong market for job seekers.

Mitch Daniels, President of Purdue University, said recently that the market for college graduates is “not just the best since I’ve been here [at Purdue], it’s the best this century, as far back as our records go.”

He further described the job market as becoming vulnerable for not having enough college graduates,

“…I think we’re running a risk now, after a 20-some-point drop, of too few seeking the credential that’ll serve them so well throughout their lives.”